"I've come to realise that every child has something to offer, all they need is a loving home to thrive in."

Geoff and Linda like nothing better than having the whole family round the dinner table or going out to the park for the day. Eight years ago the couple made the decision to adopt ten year old twins Harry and Jessica, and earlier this year they adopted a child under five who has a number of health issues including eyesight problems. Geoff and Linda also have three birth children in their 20s and two grandchildren.

Linda, 47, said: "We’re coming up to Christmas which is always a hectic time in our house – but to be honest I wouldn’t have it any other way. The older children mother the younger ones and everyone just mucks in – it sometimes reminds me of an episode of the Waltons."

The couple fostered the twins from six months and when they came up for adoption 12 months later, it was a decision they made almost immediately. Linda said: "We received approval from the birth parents and our older children were fully behind the idea as well. Our main concern was keeping them together as brother and sister."

Geoff explained further the reasoning for adopting the twins: "Our son was born brain damaged so has a number of fundamental health issues. We were told initially that he would never walk or talk but we’re delighted that he is at mainstream school.

"A lot of people wrote him off but he has developed into a lovely, thoughtful young man and we are extremely proud of him. And our daughter is a typical little lady, full of fun and very caring."

The other child under five they have adopted is also doing well although the couple admit to having to deal with a few ongoing medical issues. Linda added: "We have a number of ongoing health issues with the children but we wouldn't change a thing".

"The support we've received before and after adopting has been first class and the support is still there if we need it. Anyone thinking about adoption should not be worried about the process as it is pretty straightforward and there is lots of help and advice along the way – both from professionals and people who have actually been through it". Linda said.

Geoff added: "Having a family of six children I've come to realise that every child has something to offer, all they need a loving home to thrive in."

If you share a similar story to Geoff and Linda, and need advice and support or just want to talk, contact us. 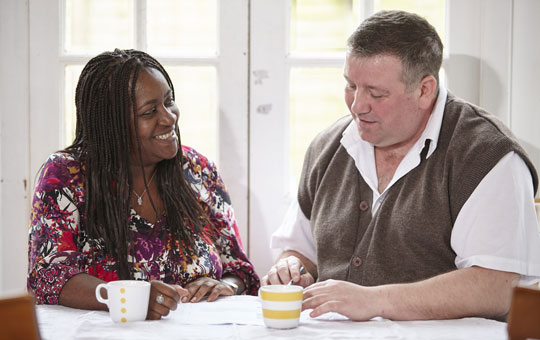 Adoption East Midlands provides the full range of adoption services across the region. If you live in or near to the East Midlands, we can help you along your journey to adopting a child.

Get in touch with us now